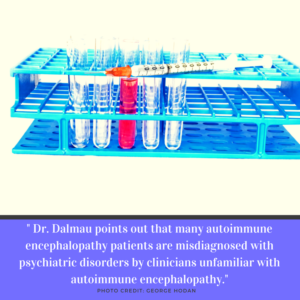 Misdiagnosis in HE/SREAT is common due to the limited information about this serious and potentially life-threatening condition.

“While a biological basis for numerous psychiatric illnesses has become increasingly appreciated, few mechanistic hypotheses have gripped psychiatric researchers as strongly as an autoimmune basis for behavioral abnormalities. Perhaps the most extreme example of autoimmune phenomena that result in psychiatric changes can be found in antibody-mediated limbic encephalitis. In these syndromes, autoantibodies interfere either directly or indirectly with neuronal function, the outcome of which is striking cognitive and behavioral changes often accompanied by severe neurological symptoms …”

HESA highly recommends this article to those would like to know more about neuropscyhiatric manifestations in HE/SREAT patients. The full text of the article about this common misdiagnosis can be found on the Psychiatric Times website. Note: Dr. Dalmau will be featured as keynote speaker at HESA’s April 6, 2019 symposium: “Autoimmune Encephalitis: A Bridge Between Neurology and Psychiatry,” at Weill Cornell Medical School, Cornell University, New York, New York.

Donate to HESA via Giving Assistant when you shop online.

Find Our Page On The Mighty

More than half of Americans are facing serious health conditions or medical issues. They want more than information. They want to be inspired. The Mighty publishes real stories about real people facing real challenges.

AE Alliance
"The Autoimmune Encephalitis Alliance promotes collaboration to improve care, find a cure and create community so that no one faces autoimmune encephalitis alone.


Mark2Cure
Scientific literature is growing at a rate of more than 2 new articles every single minute. It is impossible for scientists to consume and understand the rapidly expanding ocean of biomedical literature. You can help biomedical researchers find the information they need to discover cures faster.


RareDisesases.org
"Alone we are rare. Together we are strong.®"


HE Notebook - Wordpress Site
A great blog of an HE patient with a trove of information, personal stories, and links to medical studies.